The Battle Conference on Anglo-Norman Studies

Posted on October 21, 2014 by winchesterhistory

This past July the Department was pleased and honoured to host the 37th Annual Battle Conference on Anglo-Norman Studies. This prestigious conference was founded in 1978 under the leadership of R. Allen Brown and until 2009 took place at Pyke House, on the field of the Battle of Hastings. Stories from long-term Battlers tell us of camping on site, the reception and welcome at the Chequers Inn, and an alleged video of Brown and Ian Pearce donning full armour and riding up the battlefield slope to prove if it was possible! (Should anyone have this video, it should certainly be digitized for posterity.)

Since 2009 the Conference has been peripatetic, having been hosted by Norwich, York, Bayeux and Cambridge in the ensuing years. In 2014 under on-site organizer Dr Ryan Lavelle and Conference Director Professor Liesbeth van Hours, the Conference welcomed more than 70 scholars on Anglo-Norman England both to the University and the city.

The Conference opened with the annual R. Allen Brown Memorial Lecture, this year given by Professor Edmund King of the University of Sheffield on the topic of ‘Henry of Winchester: The Bishop, the City and the Wider World.’ This lecture was opened to the public in light of its area of interest, and was well-received with over 300 audience members comprising of the local community alongside academics.

The programme continued with three more full days of papers from scholars from as far away as Brooklyn College, City University of New York with Dr Lauren Mancia and as close to home as Dr Nicholas Karn from just down the road in Southampton and also myself, representing the Archaeology and History Departments of Winchester with a lecture titled ‘The Biography of a Place: Faccombe Netherton, Hampshire, ca 900-1200.’ As per Battle tradition, in recognition of the long-standing research links between England and Normandy on the Anglo-Norman world, the programme included a paper from a colleague at the University of Caen, Prof. Pierre Bauduin, who closed the Conference with a lecture on ‘Richard II: figure princière et transfers culturels à la charnière des Xe-XIe siècles.’ The overall programme covered a wide variety of topics on the Anglo-Norman world, from new work on the manuscripts of Dudo of St-Quentin (Dr Benjamin Pohl, Cambridge) to the appropriation of saints’ cults in the courts of Henry II and Frederick Barbarossa (Dr Gesine Oppitz-Trotman, East Anglia) to questions of history and prophecy in Geoffrey of Monmouth (Dr Jennifer Farrell, University College Dublin). The full 2014 Conference programme, as well as programmes from 2005 and later, can be found at the Conference’s website. 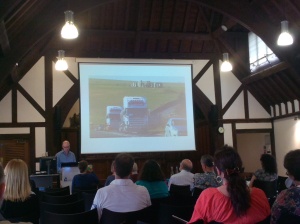 An unexpected (but contextual!) illustration from Eljas Oksanen (independent scholar, London), speaking on ‘Patterns of Trade and Travel in England during the Long Twelfth Century’. Photo by Katherine Weikert.

Of course, Conference delegates enjoyed the delights of this city alongside top-notch scholarship. Tours were scheduled to Winchester Cathedral, led by Cathedral Archaeologist Dr John Crook, as well as other Winchester sites such as St Cross Hospital. The regular Conference fellowship and camaraderie was also evident with intense conversations and jollity ensuing at local pubs!

As per usual, the 2014 Conference will be published as Anglo-Norman Studies 37 by Boydell & Brewer in 2015. The Conference has published each year of its papers since its inception, under the editorial directions of R. Allen Brown, Marjorie Chibnall, Christopher Harper-Bill, John Gillingham, Christopher Lewis, David Bates, and now Liesbeth van Houts. Full information on the publications can also be found at the Conference website or at Boydell & Brewer.

The Conference, whilst hosting some of the finest scholarship in Anglo-Norman studies, has also long had a tradition of support to early career scholars. Each year the Muriel Brown Memorial Postgraduate Bursary is awarded to a number of postgraduate scholars working in Anglo-Norman studies, awarding them full conference fees to enable their attendance. Winchester was pleased to welcome the 2014 cohort of Murial Brown award-winners in Jennie England and Emily Ward. In addition, Sara Harris won the Marjorie Chibnall Essay Award.

Overall the 2014 Battle Conference was given with great aplomb, solid scholarship and good cheer. Our thanks to the Conference Offices for their efficient and able management of the event, up to and including handling an untimely boiler issue; to postgraduate help from Karl Christian Alvestad and (now Dr) Courtnay Konshuh; to Dr Ryan Lavelle for superb on-site organization; and to Prof. Liesbeth van Houts for her overarching direction.

This entry was posted in Uncategorized. Bookmark the permalink.